Slovenské energetické strojárne, a.s. Tlmače (SES Tlmače) continues in successful implementation of denitrification of boilers in Třebovice power plant. The customer, Veolia Energie ČR, a.s. has put into effect the Option No. 2 of the Works contract on stage III of “Denitrification of boiler K12 in Třebovice power plant”. This option is included in the contract signed by SES Tlmače in the end of 2013 already and it is the last stage of this contract. The Annex of the Works contract between Veolia Energie ČR, a.s. and SES Tlmače at the end of February 2019.

The scope will include the processing of implementation documentation of civil part, performing K12 primary and secondary DeNOx measures, implementation of heavy current equipment, electric power distribution, control and camera monitoring system, performance of testing and commissioning of the Works in compliance with the required parameters. After performance of the works the customer requests to comply with NOx and CO emission limits in accordance with EU legislation.

The expected time of the start of fabrication in SES Tlmače is in the second quarter of 2019. The Works shall be finished in July 2020. 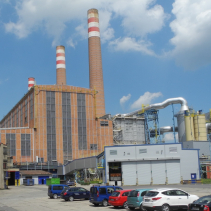